Best xmas gift — DawgNation Community
Home› General
Hey folks - as a member of the DawgNation community, please remember to abide by simple rules of civil engagement with other members: 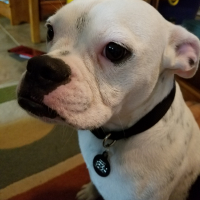 To go along with todays dawgnation's article, I was in Prague, Czech Republic this weekend and I walked past this store that sold wooden dolls and figurines. I noticed some NFL stuff so I had to check it out. Turns out they had a college football section and low and behold Nick Chubb is sitting on a shelf in the Czech Republic just waiting for this new proud owner. I was already super jazzed but then when I got to the counter the salesperson tells me its a Russian Nesting Doll and breaks Nick Chubb open to reveal... Sony Michel. Instant purchase just got 1000 times better. So then the guy busts open Sony to reveal Terry Goodwin. Then perhaps the best surprise yet Terry opened up into Hot Rod Blankenship. Respect the Specs has officially gone international folks. Then Hot Rod opened up to the smallest one which was Javon Wims. It was kinda funny because he was actually the tallest player of those guys. This is by far the best purchase I have ever made in Europe and possibly of my life. Although the Friday night in college when all I had was two dollars so I got my friend to stop by the convience store and I told him I had to make some money, to which he laughed in my face, so I bought a scratch off and won ten bucks which turned into a twelve pack of Natty. That one's tough to beat, just cause of the look of astonishment on my friend's face when i walked out with that twelve pack.