UGA and UF if they were Former Classmates at Your Ten-Year High School Reunion — DawgNation Community
Home› General
Hey folks - as a member of the DawgNation community, please remember to abide by simple rules of civil engagement with other members: 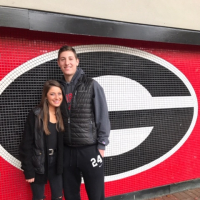 I was recently asked by a parent of a high school kid who is considering applying to UGA and Florida about my impressions of the schools, as my (UGA ’20) daughter had visited both schools and son graduates from UGA in May of 2022. I started with the caveat that we are full-fledged “Gator Haters,” but UF is obviously a strong academic school and certainly kids that go there have a great time and get a great education. I then explained how UGA was gaining fast on UF in terms of academic recognition and why UGA is a better choice in every respect (campus, town, football, nearby airports, etc.).

Yet, as I think more about it, the schools are like former classmates at your ten-year high school reunion. Bear with me here. UF peaked in high school and sure still has those great eyes (strong academics) and had that once new sports car (Tebow), but UF’s boring personality, chronic halitosis, flabby midsection and limited future job prospects are really starting to become apparent. On the other hand, UGA might have been a little quiet in high school but was always attractive (Athens and campus) and now, with a graduate degree (Kirby) and more confidence is really blossoming. As you chat with UGA, you notice how well it has aged and remember it has always been smart, funny and likeable and now has unlimited potential.

I wrote a post a few years ago on DN about my kids’ college searches (from New York), UGA’s growing national brand and an analogy between what had been (and is still) happening on the recruiting front. (If anyone is interested, you can search for it: “UGA as a National Brand – From Sea to Shining Sea!”). By way of update, as mentioned my daughter graduated in May of 2020. She has a great job after having been recruited on campus by a major tech company. She (like my son who is graduating in May of 2022) cannot imagine herself having gone anywhere else. They have both made life-long friends that live and work all over the country and seem to be generally thriving. They, like our whole family, bleed Red and Black.

Returning to the “reunion” and the UGA/UF comparisons, our campus visits were quite telling. From two UGA official tours and information sessions and two orientations, I was struck by how well organized UGA was and how Athens and UGA was so easily (and effectively) shown off and sold. Again, your thriving classmate UGA, was smart, funny, interesting, looked super fit and seemed to be working hard to improve itself in every respect.

In contrast, when my daughter and I were on our UF visit a few things seemed odd. The campus is massive, and some parts are pretty (like your former classmate’s eyes), but many other areas had similarly seen better days. And to make matters worse, it did not seem like the UF tour leaders were trained properly to highlight the positives of life at UF. It was a very cold and windy day and our tour leader spoke to the group in a shady area as we froze, rather than moving the group twenty feet over into the sun where everyone would have been more comfortable. And this was all happening in an **** part of campus. Why?

Imagine finally getting a chance to date someone you have liked for years, and you could plan to “accidentally” run into either your cousin, actor Paul Rudd (or insert another famous person everyone seems to love), or your most annoying relative. This seems simple, but maybe because UF “used to be hot” (a winner 10+ years ago) and still thinks it is as hot as ever, it does not feel the need to work hard to keep up? Perhaps blinded by what UF (and Tebow) looked like years ago, it forgets that portions of its midsection (its campus) are dumpy?

The reunion is not even halfway over, but you now realize that UF never had much of a personality (college town) anyway. Gainesville is not even in the same discussion as the best college towns in America like Athens. In fact, it is not really a traditional college town, but rather a stretch of bars and restaurants that look like other nondescript parts of Florida (like Military Trail or Jog Road in Boca or Boynton Beach where your grandma goes to Publix). And besides this lack of personality, once you get to know the area just outside of where students party (i.e., UF’s extended family), you learn that Gainesville has some sketchy areas where mattresses seem to be lawn decorations of choice.

Before UF has even realized any of its shortcomings, it is sloppy drunk, eating way too many pigs in blankets and making questionable decisions. It even extends the contract of a football coach that never peaked in high school, or at any point, and has a kissing bandit of a wife who, like your creepy gym teacher, is a bit too touchy.

The reunion made clear that UF’s best days are clearly behind it, and you wonder if it will even show up for the twentieth. Either way, UGA is looking better than ever and poised to soar to even greater heights. Go Dawgs!