Born to fish... — DawgNation Community
Home› Off Topic
Hey folks - as a member of the DawgNation community, please remember to abide by simple rules of civil engagement with other members: 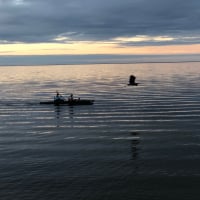 Those who were, know the rest of that phrase.

The practice/passion comes up every now and then in various threads here; the “brag” string @texdawg started earlier this year where @Savage posted the MARTA bus sized bow and brown he landed (I still see those fish in my dreams). Most recently when Savage again brought up thinking about asking another DawgNation brother/sister to go fly fishing.

But, I don’t know if there’s been a dedicated off topic thread to the craft/addiction of bringing fish to hand.

I’m thinkin we can talk about where you fish most? For what species? Where do you long to fish? Why do you fish? What’s biting now? Let folks know if you’re looking to for someone to fish with. Whatever, and yeah, maybe a bit of story tellin’.

If so, let’s go. If not, no worries and tight lines to all and Go Dawgs!