Rob Estes — DawgNation Community
Home› Off Topic
Hey folks - as a member of the DawgNation community, please remember to abide by simple rules of civil engagement with other members:

I met Rob Estes on September 5, 2015. He and his family had just been recognized on the field for their efforts in establishing “Can’t Never Could,” a non-profit organization that provides assistance to families that struggle financially while battling illness.
Rob was an easy guy to talk to, the kind of guy that can make you feel like a best friend in five minutes. He told me that his doctor found a brain tumor in his head two years prior and gave him a few months to live. After surgery and treatment he was ecstatic that in two years of having twice a month MRIs there was absolutely no sign that the tumor had returned. But mostly we talked about Mark Richt, Grayson Lambert, and Nick Chubb. He loved the Dawgs and seldom missed a game. It was clear that he was attacking his second lease on life with love, joy, and passion. 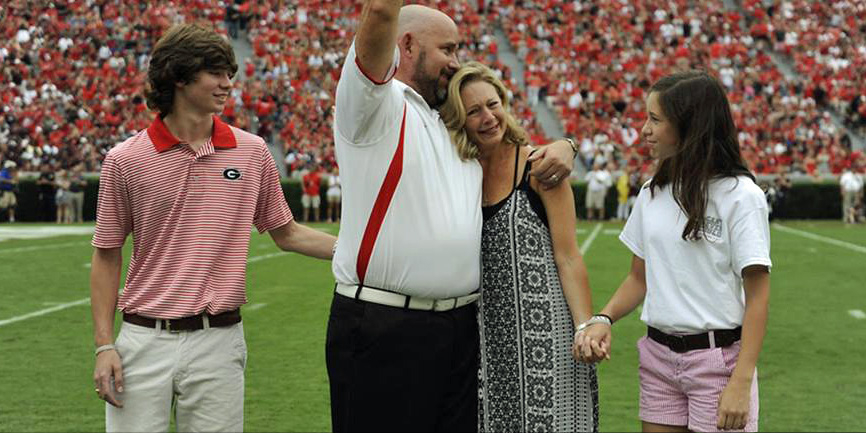 When I got home I had a Facebook friend request from Rob. I was genuinely glad to have made his acquaintance and to have this method of social media to keep in touch… until a few days later when he posted that during his bi-monthly MRI the doctor saw a tiny spot that would eventually send Rob back into surgery.
For the last two years Rob has been on a medical roller coaster, but he never lost his optimism or his sense of humor, or his passion for “Can’t Never Could,” or his faith in Christ, or his love and devotion to his wife and two children... or his zeal for the Bulldogs. He was getting healthier through last summer and it just seemed that the skies were bluer than usual. He was so pumped up about Kirby Smart and the sicem17 class and Nick Chubb coming back for his senior year; he was convinced that 2017 was the year of the Dawg- almost like God’s providential hand was going to will Georgia to a National Championship!
On December 5th, just three days after celebrating Georgia’s first SEC championship in twelve years, Rob suffered a grand mal seizure. As bleak as things seemed Rob quickly got enough strength to sit up and joke around with his visitors. But on December 13th the doctors had the dreaded long, hard conversation with his wife, and she took him home to Hospice care.